(The following contains SPOILERS. It is intended for people who have seen Robocop, The Terminator, and Aliens.) 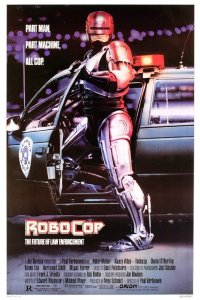 In 1984, director James Cameron’s The Terminator rewrote the rules of science fiction cinema. By injecting high-tech futurism, doomsday mythology, and white knuckle action sequences into a classically structured film noir narrative, Cameron metamorphosed the traditional man vs. monster(s) sci-fi paradigm into the modern techno-thriller. Arnold Schwarzenegger’s Model 101, Series 800 Terminator (a metal endoskeleton surrounded by living tissue) is portrayed as both machine and monster. Two years later, Cameron would continue his exploration of the relationship between man and machine while reintroducing perhaps the most iconic of all sci-fi villains: the alien from another world. 1986’s Aliens is, at its core, a classic man vs. monster narrative, with a modern techno edge and distinct horror-movie vibe. However, unlike Schwarzenegger’s killer cyborg, whose destruction is only accomplished after its human exterior is burned away, exposing its metal endoskeleton, Sigourney Weaver’s Ripley only triumphs over the Alien queen when she cocoons her very vulnerable human exterior within the metallic exoskeleton of a futuristic cargo-loader before engaging in the climactic final battle. So … considering the massive, genre-altering success of The Terminator in 1984 and Aliens in 1986, it’s understandable that so many people see 1987’s Robocop—another sci-fi/action exploration of the man-machine relationship—as little more than a gimmick-film engineered to sell tickets from the relative safety of James Cameron’s ample coattails.

Those people could not have been more wrong.

Beyond the gun fights, explosions, and all the graphic bloody violence, Robocop is a cutting satirical portrait of American greed and its role in the death of the American dream. Corporate America is arguably the film’s primary target. In the cinematic universe of Robocop, a megacorporation called Omni Consumer Products (OCP) owns and operates the Detroit Metropolitan Police Department. With this one simple story point, the film is transfigured from an ultraviolent summer popcorn feature into a cinematic allegory of the dangers faced by society when giant corporations and their highest-ranking executives are literally above the law. In fact, the film’s top villain, OCP Senior President Dick Jones, benefits (albeit temporarily) from a programming caveat that disallows Robocop from arresting any OCP executives. This may have been intended to satirize unrestrained corporate power in the ’80s, but it remains relevant today, in the wake of the 2008 collapse of the housing market, when words and phrases like bailout and too big to fail have become permanent additions to the average American’s lexicon.

And yet, the average American is portrayed neither as victim nor hero in the film; instead, Robocop deftly (but not at all subtly) insinuates the average American’s willing participation in the greedy, materially gluttonous lifestyle promulgated by corporate America by depicting suburban malaise as symptomatic of rampant consumerism. This is achieved through the use of broadcast news coverage of earth-shattering events interspersed with commercials shamelessly promoting completely superfluous products. A news story about the potential use of nuclear weapons as a deterrent against a minority uprising in an apartheid-ravaged city-state is counterpoised by a commercial for a board game called Nukem, in which mutually assured destruction via nuclear weaponry is fodder for game-night kicks for a stereotypically white suburban family pretending to be warring factions on the international stage. The commercial ends with the family patriarch proclaiming, “That’s it, buster! No more military aid for you!” Someone hits the Red Button, and the family cackles gleefully as an F/X mushroom cloud rises portentously from the game board. Then comes the tagline: “Nukem: Get them before they get you.” In another news story, a laser-canon misfires, instantly scorching “10,000 acres of wooded residential land” in Santa Barbara, while a commercial for a ridiculous gas-guzzling automotive behemoth called the 6,000 SUX boastfully proclaims: “Big is back, because bigger is better.” Here the film is clearly identifying a correlation between the American consumer culture and the average American’s utter indifference to the world beyond his or her own experience.

Besides criticizing Wall Street corruption and Main Street apathy, Robocop also manages to take steady aim at topics such as gentrification and the physical and moral dangers inherent in the pursuit of technological advancement, without becoming heavy-handed or pedantic. In one succinct, perfectly rendered scene, the film’s top white-collar villain (OCP’s Dick Jones) casually discusses his plan to gentrify a low-income neighborhood by erecting high-end restaurants and shopping centers, displacing the neighborhood’s cash-poor residents and freeing him to then install the film’s top blue-collar sociopathic villain (Clarence Boddicker) as the neighborhoods unquestioned drug kingpin/criminal overlord. While this scene speaks to the villains’ lack of humanity and morality, a parallel scene depicts Robocop reconnecting to his humanity by dreaming of his wife and child, an act that sends him racing back to the streets to do what he knows is morally right: fight crime.

It is important to remember that, unlike Schwarzenegger’s singularly focused kill-bot, Robocop is part human. The human side of Robocop (a.k.a. Alex Murphy) allows the film to explore the man-machine relationship much more intimately than either The Terminator or Aliens because Alex Murphy/Robocop is literally both man and machine. It should also be remembered that the cyborg Robocop (part-man, part-machine) only comes to exist in the film because a robot-cop prototype called ED-209 (all-machine, no-man) blows a circuit and executes an OCP employee during a boardroom presentation. Here’s where the film’s portrayal of the man-machine relationship gets interesting. ED-209, a hulking machine with high-caliber machine guns for arms, proves that machine-without-man is dangerous to man. However, as Robocop begins to self-identify more as Murphy, his inability to be a fully realized human being despite the knowledge of his partial humanity suggests that machine-and-man is inhumane to man. And yet, when ED-209 is enlisted to destroy Robocop, endangering the very human populace, Robocop triumphs over ED-209, suggesting that machine-and-man is superior to machine-without-man. But … Robocop’s obliteration of ED-209 leads to a final confrontation with ED-209’s human creator, Dick Jones. Of course, Robocop destroys Jones, suggesting, finally, that machine-and-man is every bit as dangerous to man as is machine-without-man. In other words, entrusting technology to protect human lives and human interests is inherently fraught with danger, regardless of the form that technology may take.

Robocop’s victory in battle over ED-209 is the only instance in which the film’s exploration of the man-machine relationship coincides with the same relationship in The Terminator and Aliens. Robocop (part-man, part-machine) defeats the robot (or machine) Ed-209. Similarly, in The Terminator, Sarah Conner is only victorious when she (a human) utilizes a hydraulic press (a machine) to crush the life out of the terminator. And the same is true in Aliens. Ellen Ripley’s conquest of the Alien queen is only accomplished with the aid of that now-legendary mechanical cargo-loader.

So maybe Robocop does actually share some of the same cinematic DNA as James Cameron’s now-iconic ’80s sci-fi classics. But to be fair, the film also borrows liberally from a number of film genres and established narrative templates. Beyond the obvious connections to science fiction, action, and satire, the film overtly references westerns, as evidenced when Robocop twirls and holsters his custom-made hand-cannon in homage to T.J. Lazer, the hero of his son’s favorite show. The influence of horror films on Robocop is also evident in the film’s over-the-top use of graphic, bloody violence, and in its revenge-from-beyond-the-grave storyline. After all, it isn’t much of a stretch to view the Robocop character as a zombie, seeing as Alex Murphy was slaughtered then resurrected as Robocop to perform slaughter, just as people who are killed by zombies are resurrected as zombies in order to kill and create more zombies. And, of course, Robocop can be interpreted as yet another appropriation of the Frankenstein metaphor. Like Frankenstein’s monster, Robocop will never be accepted as a human being, despite the parts of him that are distinctly human. And, like Frankenstein, Robocop’s narrative plays as a stern warning against the hubristic pursuit of utilizing scientific achievement to play God.

Regardless of how one chooses to interpret the film, it should by now be inarguable that Robocop is not, as some will contend, just a cheap retread of concepts made popular by The Terminator and Aliens. In fact, Robocop is a unique, indispensable, genre-mashing classic whose brand has endured, and even flourished, despite the release of two ill-conceived sequels, a short-lived TV series, and a completely unnecessary remake. So even if the film never gets the respect it rightly deserves from those fans and critics who see it only as The Terminator’s little brother, Robocop will remain, for generations of film fans, so much more than the sum of its human and metallic parts.