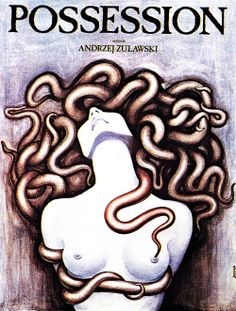 Here’s something you don’t see every day: a gleefully esoteric horror film about the breakdown of a marriage, made by a serious filmmaker, starring serious actors, targeting a serious adult audience. With its outrageously gooey creature effects, green-eyed doppelgangers, over-the-top dialogue, and a loopy narrative high-wire act (including a spy-thriller subplot that bookends the film), Andrzej Zulawski’s Possession is perhaps the ultimate example of ’80s art-house horror done right. Isabelle Adjani and Sam Neil play a couple who clearly love each other yet whose marriage is apparently unsalvageable. He has been away on a secret mission for far too long; she has been unfaithful … and so much more.

Even though watching this couple scream, kick, punch, slap, and completely trash a café in the name of love (or lost love) can seem tedious at times, there is no denying the power of many of these argument/fight scenes, which somehow manage to feel savagely real and dreamily unreal at the same time, a quality also easily applied to the film as a whole. Adjani and Neil are perfectly cast (this role won Adjani numerous awards, including Best Actress at the Cannes Film Festival), as is Heinz Bennent as Heinrich, the creepily eccentric Renaissance man with whom Adjani’s character is having an affair.

The film was shot in Berlin amid a cluster of intertwining streets and colorless decaying buildings. The lighting is austere, punctuated by storm-cloud gray exteriors and muted, lived-in interior spaces with impossibly dark corners swathed in shadows as dense as black holes. Intermittent shots of armed guards patrolling the Berlin Wall mirror the couple’s failing relationship: they are physically so close to one another yet unable to communicate respectfully,  or even without the looming threat of violence, as evidenced in their many physical altercations.

Possession is ultimately a strange, challenging film that requires the viewer’s undivided attention and patience. It’s a film that asks difficult questions about human behavior, particularly concerning adult relationships, and attempts to answer none. It’s a film that trades in metaphor and allegory and refuses to make the experience easier or more palatable for its audience. In other words, Possession is not a traditional horror film: no jump scares, no bogeymen in masks. It is, however, a movie that will leave an indelible impression on anyone who has ever been in a relationship and wished they could mold their partner into an idealized version of a girlfriend, boyfriend, or spouse. Some fantasies are better left in Fantasyland.

(Oh, by the way, the infamous subway miscarriage scene earns every bit of its reputation and is well worth the price of admission on its own. Way to go Isabelle!)