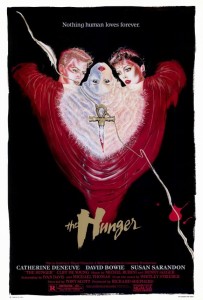 Back in my college days, I remember The Hunger inspiring many a lunchroom debate among my fellow film majors. To this day, those who support the film argue that the tone is suitably creepy, the performances from Catherine Deneuve, David Bowie, and Susan Sarandon are pitch-perfect, and the story innovates by depicting vampires as something more than just blood-sucking monsters in constant search of their next fix. In addition, they’ve argued, the film deftly utilizes vampire lore to truly consider the ravages of time—specifically an eternity of time. These are all valid assertions, worthy of consideration, made by reasonable people.

And yet The Hunger represents everything I dislike about vampire movies. Regardless of how deeply philosophical the film wants to be, ultimately it is nothing more than a hyper-stylized cinematic orgy of writhing flesh and cascading blood in which beautiful creatures of the night lament the curse of immortality while propounding half-baked ideas about the profundity and timelessness of love in the face of death (or undeath or immortality or whatever the hell). Sure, these fanged lovelies may seem tortured and complex and even a little bit relatable, but don’t be fooled. In reality, regardless of what they may say, their actions are those of pretty people who want to live in pretty houses and wear pretty clothing and stay pretty forever—and nothing more.

And then there’s the overwhelming visual style of The Hunger, a style I like to refer to as “Vampire Chic,” a kind of neo-Gothic visual product derived from a combination of old-world European fashion sense and moneyed new-world excess. To wit: These vampires are stylish old-world Europeans who live in a hulking European-style mansion, which is located right smack in the middle of ’80s (or modern) New York City. They wear the latest designer clothing accented by old-world European jewelry. The décor of their home, with its vast empty spaces and great walls hung with European portraiture, suggests a bridging of snooty ’80s minimalism and something straight out of Vlad the Impaler’s sitting room. This confluence of contrasting styles allows the filmmakers to appeal to (or pander to) both old-school vampire enthusiasts (those from the Stoker tradition) as well as new-age vampire devotees whose allegiance to the fang was born in the Goth clubs that rose to pop-culture prominence in the early ’80s.

The Hunger is a film that luxuriates in Vampire Chic, constantly reminding the audience that it is indeed a vampire film. Much of the film takes place in the sparsely decorated rooms of a cavernous mansion that just screams: VAMPIRES LIVE HERE! And, lest we forget, nearly every shot features either horizontal shadows cast by pale light shown through window slats or the ridiculous rippling of silk curtains against an ethereal, almost supernatural breeze. I’m not kidding. I challenge anyone to watch this movie and not be shocked by how many times the characters are photographed near billowing curtains—or even through billowing curtains. Seriously, there are several (by “several” I mean way, way too many) shots in which the camera photographs the characters directly through silky, billowing curtains, as if to create some kind of bizarre, neo-Gothic Vaseline-lens effect. But it gets worse. In addition to the billowing curtains and the hardboiled, Mickey Spillane-style shadows, director Tony Scott introduces—you guessed it—fluttering doves into the mix. In scene after scene, the characters maneuver within absurdly ornate spaces, both interiors and exteriors, oddly occupied by a cote of doves, flapping and fluttering about, often in slow motion. Strangely, the presence of these birds is never questioned—by anyone! Ever! And before you even ask, the answer is yes. Of course there is a final sequence that prominently features both silky billowing curtains and fluttering doves.

The Hunger is one of those movies that would be fun if it didn’t take itself so seriously. As it stands, the movie unintentionally works as a metric to define where you stand on vampire cinema: If you love vampires unconditionally, you’ll find a lot to love about The Hunger. If vampires need to earn your love, The Hunger may well prove to be a grating experience that severely tests your patience.