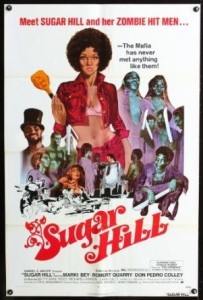 In the 1950s, American International Pictures began making a name for itself as the premiere distributor of schlocky horror/sci-fi/creature features (like It Conquered the World and Invasion of the Saucer Men), rebellious teen films (like Dragstrip Girl and Rock All Night), and, of course, the inevitable combination of schlocky horror/sci-fi/creature features with rebellious teen films (like I Was a Teenage Werewolf and I Was a Teenage Frankenstein). Something similar occurred at AIP in the ’70s. Thanks in no small part to the throngs of fans descending upon drive-ins and grindhouses, the distributor enjoyed continued success with its line of outrageous schlock horror films, although now the films often came with heavy doses of ’70s-era psychosexual/weirdo vibes (films like The Incredible 2-Headed Transplant and A Lizard in a Woman’s Skin). By 1972 AIP had managed to locate and successfully mine a rich new vein of urban moviegoers by producing a slew of blaxploitation crime thrillers (like Black Caesar and Coffy). And so the continued popularity of AIP horror films and the rising popularity of AIP blaxploitation films led to the inevitable: the creation of the blaxploitation horror film.

When you consider the success of early blaxploitation horror films like Blacula (1972) and the sequel Scream, Blacula, Scream (1973) along with the continued success gritty blaxploitation action films, particularly 1973’s Coffy, starring Pam Grier, it shouldn’t come as a surprise that AIP would make a movie like Sugar Hill, a film that attempts (and succeeds) to fuse all of the elements of blaxtoitaion action and crime cinema with the creature feature/horror elements that made the Blacula films successful. Being that Pam Grier’s star power was becoming undeniable, as was the ever-swelling fan enthusiasm for Coffy, it should also not come as a surprise that Sugar Hill is essentially Coffy with zombies. Both Coffy and Sugar Hill tell stories of strong, independent women taking the law into their own hands after a loved one is attacked by the criminal element in their respective cities, and both film titles refer to the street names by which the lead characters are known. The only major difference: While Pam Grier’s Coffy character seeks revenge through the use of traditional weaponry and street smarts, Marki Bey’s Sugar Hill character seeks the help of a voodoo overlord, Baron Samedi, to sic an unstoppable horde of flesh-eating zombies on the gangsters who killed her man and now want to take away her nightclub.

As an overall viewing experience, the influence of Coffy on Sugar Hill really doesn’t matter. Regardless of how it came to be, Sugar Hill still feels like a complete original. By combining a classic revenge thriller with a classic voodoo/zombie chiller, the film manages to create an atmosphere and vibe that is distinctly its own. Of course, like most zombie movies (and like just about all revenge thrillers, for that matter), the story, once properly set up, is quite predictable, and many of the characters are nothing more than by-the-numbers baddies or clueless friendly acquaintances. But, while so many similarly themed films grow tedious or even unwatchable, Sugar Hill is a blast from start to finish, providing a definitive example of the difference between simply following the formula and the formula done right.

Marki Bey is a strong, sexy, charismatic lead, whose toughness seems genuine and not at all like a caricature of a tough girl gone rogue. Mama Maitresse and Baron Samedi, the voodoo practitioners, are wonderful creations, blessed with heaping mounds of joyful charisma and ice-cold menace. And, finally, the zombies in this movie shamble, stalk, and steal every scene they’re in. Their eyes are bulging shiny orbs that create a haunting, lifeless stare. They are often draped in cobwebs and wear rusty chains and manacles beneath a layer of tattered clothing that serves as a constant reminder to the audience that they are actually the resurrected corpses of slaves, adding a little extra historical and sociopolitical pop to the proceedings.

Sugar Hill’s blaxploitation pedigree may make it seem, to some, as a relic of the ’70s and nothing more. However, if the goal of a horror film is to make the world of make-believe believable, to create an escape from the mundane, day-to-day realities of life, and to tell a compelling story, then Sugar Hill is so much more than a relic—it’s timeless.