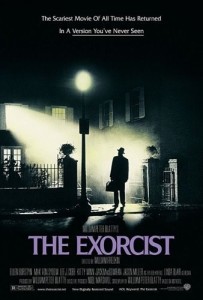 In recent years The Exorcist has become that rare movie that actually suffers from an iconic reputation. Younger horror fans find the movie boring and predictable. The reason for this is simple: The Exorcist, when it was released at the end of 1973, was so startlingly original, so shocking, so daring, and ultimately so profitable that it has become one of the most routinely and shamelessly) ripped-off films in the history of cinema. Over the last few years alone, it seems that nearly every horror movie that wasn’t a slasher film ended with an exorcism scene. Even supposedly true stories that don’t contain exorcisms were suddenly being adapted into mainstream movies with climactic exorcism sequences. Two of the most obvious (and egregious) examples of this trend are The Conjuring and The Possession. The Conjuring is the story of the Perron family’s battle with supernatural forces in their Rhode Island home. In actuality, there was never an exorcism performed on the family’s matriarch; however, the film spends its entire last hour setting the scene for a final confrontation between good and evil in the form of—you guessed it—a good old-fashioned exorcism. This is where The Conjuring stops being a compelling ghost story and becomes just another attempt to cash in on the popularity of exorcism movies created by The Exorcist. But that’s nothing compared to the ridiculous lengths taken by the makers of The Possession to avoid creating an original film. The true story that inspired The Possession concerns a haunted wine box and the many strange happenings and possibly supernatural coincidences experienced by the box’s numerous owners. However, the story the makers of The Possession decided to tell concerns a family dealing with divorce, an estate sale, and the purchase of a cursed wine box by the family’s youngest daughter, which, of course, leads to her possession, which, of course, leads to a final exorcism sequence replete with otherworldly winds, demonic voices, levitations, and lights that incessantly flicker for absolutely no reason. In the end, The Possession is clearly much more of a cheap retelling of The Exorcist than it is a first-telling of a story about a haunted wine box in which no one—not one single person—is ever possessed or exorcised. So I actually understand why younger viewers are often unimpressed by The Exorcist. By the time they finally get around to seeing the film, they’ve already experienced the story hundreds of times in scores of inferior film and television productions. Such is the fate of numerous iconic stories throughout history, such as Romeo and Juliet and A Christmas Carol.

Unfortunately for The Exorcist, few people remember that, in 1973, the word exorcism wasn’t really all that well known and almost never used in casual conversation. It was also not at all normal to see a film in which one of the main characters was a priest who’d lost his faith, although this, too, would become a well-worn genre trope in years to come. Most importantly, audiences need to be reminded that The Exorcist is about much more than possession and exorcism; it’s a film that actually depicts the debate between fact and faith, science and superstition, hard data and religious dogma. The Exorcist works as horror, philosophical drama, existential mystery, and, perhaps most importantly, pure entertainment, and you can’t say that about any of the rip-offs Hollywood has churned out in the film’s rightfully iconic wake.