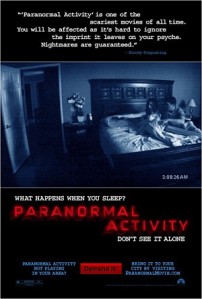 Over the last few years I have heard a number of filmmakers and fans say that they prefer realistic horror to supernatural horror. Their argument—and it’s a pretty good one—is that they are only truly afraid of things that they believe could actually happen in the real world. However, the real question should be: What do you find scarier, things known or things unknown? To me, the world of the unknown provides considerably more potential for gooseflesh and nightmares. After all, which is scarier, daylight or darkness? The explainable or the illogical? Hungry Hungry Hippos or a Ouija board? If, for example, a masked madman with an axe were chasing me, I would certainly be terrified, but I would at least be able to wrap my mind around what was happening. I would know that the man behind the mask is still just a man—a psychotic, horrifying monstrosity of a man, but just a man, nonetheless. Despite the approaching danger, I could diagnose my situation and logically attempt to extricate myself from that situation. On the other hand, if a demon were stalking me, I would have no logical means of recourse at my disposal. The laws of science and reason would be suddenly mutable. Logic would be a liability. I would be entirely at the mercy of an invisible, indefinable foe, whose motives are unknowable and whose methods are unfathomable.

Movies like Paranormal Activity are most effective when exploring the inherent, genetically coded fear of the unknown shared by virtually all human beings who aren’t total sociopaths. The movie wisely and expertly eliminates the possibility of any safe haven for Katie and Micah, a young couple being tormented by a demon. For example, most people feel safe in their homes. Well, in this movie, literally all of the terror takes place within the boundaries of the tormented couple’s private property; in fact, only a very few shots occur outside of the house. Another example: Many people have been known to combat the late-night creeps by climbing into bed and pulling the covers up tightly around them. Well, in this movie, the bedroom serves as a focal point of the demon’s wrath, with much of the action taking place while our woebegone couple rest comfy-cozy in their big warm bed. This demon means business, and the film smartly allows its otherworldly villain to completely deny our besieged heroes any quarter … not anywhere … not ever.

Paranormal Activity also succeeds at making the illogical seem terrifying. So many movies destroy a perfectly creepy story by over-explaining the source of something that is intrinsically unexplainable, effectively sapping the scare-power from a tale by training a spotlight directly on what should clearly remain in the shadows. But Paranormal Activity cleverly suggests that this particular haunting isn’t the result of a voodoo curse or a Ouija board experiment gone horribly wrong or an ill-conceived night of dancing on graves at the local cemetery. No, this haunting is no one’s fault. This demon has been terrorizing Katie since childhood because … well, that’s what demons do. Making the Katie character a random victim implies that this could happen to anyone, even to movie fans who revel in Katie’s torment. Unfortunately, the sequels attempt to create an expository mythology for the demon’s presence, including a ludicrously weak narrative construct complete with satanic grannies striking Faustian deals. But the original film is still worthy of the occasional after-midnight viewing for those of us who prefer our horror treats served up with a dash of the supernatural and the illogical.