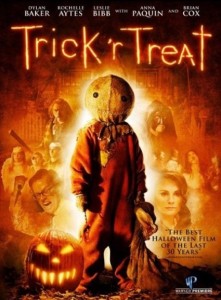 There is perhaps no horror subgenre more difficult for filmmakers to conquer than the anthology film. On the positive side, anthologies are not bound to any one horror style, classification, or category; they are free to explore the entirety of the genre, from astral projection to zombie apocalypses, all within the same film. On the negative side, anthologies are, by their very nature, unable to spend much time on any one story; therefore, the freedom of anthologies to explore different styles of horror is usually stifled by the need to keep each individual tale simple enough to be told quickly. There simply is no room for narrative innovation or the fleshing out of complex characters in the storytelling. And so the result is usually a lazy assemblage of predictable tales rife with buckets of blood, mutilated bodies, and too many jump scares bother counting.

The primary innovation that separates Trick ‘r Treat from so many by-the-numbers horror anthologies is the way in which the stories unfold. Traditional anthologies tell stories one at a time, often introduced by either some sort of macabre master of ceremonies (a la the Crypt Keeper) or through a simple narrative device that allows characters to take turns regaling each other with their personal nightmares. But Dougherty slyly subverts the one-story-at-a-time expectation by introducing all of his characters early in the film, then moving back and forth between their stories, even playing with the timeline along the way, until the film begins to feel like a complex singular story about one Halloween night in a banal suburban landscape rather than five individual stories. And yet, all of the traditional anthology fun is still here to be had. We get a serial killer story, a monster story, a ghost story, a curmudgeon-who-hates-Halloween-gets-his-comeuppance story, and a see-what-happens-when-you-don’t-follow-the-rules story—and all of them pay off in grimly satisfying ways.

In the years since its release in 2007, Trick ‘r Treat has become a bit of a cult classic and a must-watch on Halloween for hordes of horror fans. This is due largely to the film’s visual style. Very few films have ever captured the fun/nostalgic atmosphere of Halloween night like this sucker. In virtually every shot we see either people in costumes or trick-or-treaters or decorated houses or jack-o’-lanterns, all punctuated by the bright colors of autumn foliage spread out across windswept streets and leaf-strewn lawns.

Ultimately, Trick ‘r Treat succeeds as an inventive work of horror filmmaking and as a nostalgia-inducing homage to Halloween.