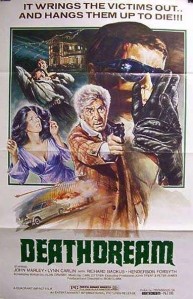 George A. Romero’s Night of the Living Dead (1968) is rightly credited for forever redefining the zombie movie; but, perhaps more importantly, it is also the first independently produced low-budget horror gore-a-thon to subvert and attack establishment thinking. The film overtly criticizes media power run amok, speaks directly to the state of race relations in the country, and suggests the possibility of a coming revolution (e.g. masses of the Dead rising up to overthrow the status quo)—and all of this is accomplished while maintaining a pulse-pounding suspense narrative that never forgets its horror roots or skimps-out on moments of pure unadulterated terror. NotLD would go on to be become a midnight-movie phenomenon that would ultimately be accepted as an indispensable genre classic. It would also make a decade’s worth of exploitation horror cinema seem superfluous by comparison.

With the exception of one fatal flaw, director Bob Clark’s Deathdream (1972) could be seen as a worthy successor to the legacy created by NotLD. With its tale of a dead American soldier returning to his hometown to visit the horrors of Vietnam upon the sleepy denizens of suburbia, Deathdream, like NotLD, is most certainly a movie of and for its time. It can be seen as an obvious criticism of the Vietnam War itself, as a criticism of the way soldiers were treated upon returning home, or as a portrait of the naiveté of the average citizen who will never endure the physical and emotional burden of combat. And now, with the benefit of historical hindsight, the film could even be interpreted as an ex post facto PTSD allegory. (It wasn’t until 1980 that post-traumatic stress disorder was finally added to the third edition of the Diagnostic and Statistical Manual of Mental Disorders by the American Psychiatric Association.) The film’s intention to be much more than just another drive-in zombie splatter-fest is perhaps most evident in a scene in which Andy the zombie soldier visits his family’s doctor. After making the doctor listen to his complete lack of a heartbeat, Andy addresses the doctor’s stunned countenance by saying: “I died for you, Doc. Why shouldn’t you return the favor?”

For all its good intentions, Deathdream, like so many well-intentioned horror films, eventually devolves into little more than a series of gruesome (and seemingly random) bloodlettings. People start dying in horrific ways because … well … it’s a horror movie and people are supposed to die in horrific ways, right? Deathdream ultimately feels like a wasted opportunity, albeit a well-crafted wasted opportunity. Strangely, the movie reminds me of Damien: Omen II. Don’t worry, I’ll explain. Damien tells the story of a pre-teen boy coming to the overwhelming realization that he is the son of Satan. This could have been an interesting subject for a horror film. We could have been treated to a fascinating exploration of a boy on the cusp of becoming both a man and a monster, knowing that he is helpless to do anything about either. Instead, once Damien learns of his satanic lineage, he immediately starts killing people in particularly awful ways, and the film becomes just another body count movie.

While Deathdream ultimately betrays the lofty expectations it creates, it is still well worth seeing. The acting, filmmaking, and cinematography combine to create a Currier and Ives-style atmosphere of warmth and hominess (lots of picket fences and fluffy dogs—hell, you can almost smell the apple pie cooling in an open window), which perfectly contrasts the violence about to ensue, like red paint on a white canvas. Kudos to director Bob Clark (whose next horror film, Black Christmas, would become a slasher classic) for attempting to say something significant with a zombie film. Yeah, he couldn’t quite sustain the power of the metaphor for the entire running length of the film, but at least he gave it a hell of shot, which is more than I can say for Damien and so many others of its creatively bankrupt ilk.