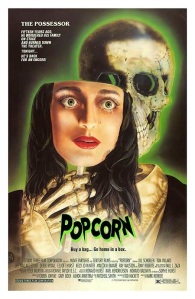 Although it was released theatrically in 1991, Popcorn feels more like one of the last ’80s horror films than one of the first horror films of the ’90s. In fact, Popcorn could be seen as the movie that bridges the gap between dark ’80s slasher flicks and the sleek, meta, ironic-commentary horror shockers of the ’90s and beyond, as Popcorn works as both a serious slasher film and as a loving parody/homage to the history of horror cinema. As a slasher film about film students being stalked during an all-night horror movie marathon in a musty, dusty, old-timey theater from the William Castle days of yore, Popcorn is clearly a precursor to Scream’s wink-at-the-audience style of horror as a commentary on horror cinema as entertainment.

Subjectively, I much prefer this movie to the Scream movies. No offense to the Scream fans out there. I get it. Those movies certainly have their moments (thanks entirely to the direction of Wes Craven), but I just find them a little too cutesy, a little too pandering, a little too insular, and not nearly as clever as they clearly are trying to appear. Popcorn, however, knows exactly what it is: a fun, low-budget, unabashedly unpretentious B-movie slash-a-thon totally devoid of any delusions of grandeur. Popcorn is a movie that knows it’s not great, and that lack of self-consciousness provides the requisite creative freedom for it to at least be really good. I won’t bother unpacking the ebbs and flows of the storyline, and I wouldn’t dare reveal any spoilers. I will say that, with a few notable exceptions, slasher movies and I haven’t enjoyed a mutually beneficial relationship. I find the stories totally lacking in originality and the characters so lazily drawn that I stop caring what happens to them within seconds of their introduction. And yet, I really do enjoy watching this movie. And while Popcorn is admittedly not one of the great slashers, like Halloween or Black Christmas, it is a great entertainment and a great movie to kick back late at night and watch with a cold drink and a salty, buttery bowl of … well, you know.