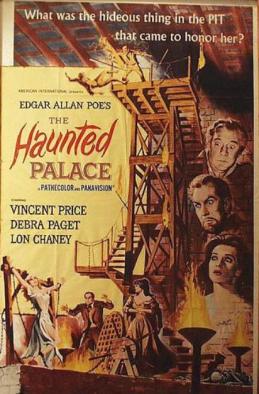 This is one of those movies in which the sins of the past come back to wreak full-blown panic on the present. Vincent Price stars as Joseph Curwen, an evil warlock who is put to death by a handful of God-fearing townspeople who’ve had enough of the ominous goings-on regularly occurring behind the formidable walls of Curwen’s supremely Gothic mansion. While being burned at the stake, Curwen vows revenge from the beyond the grave and curses those who’ve had a hand in his death. Cut to 100 years later, when Charles Dexter Ward (also played by Price), a descendant of Curwen’s, arrives in town to take possession of the mansion. Soon the spirit of Curwen tries to possess the body of Ward and begin his season of resurrection and comeuppance. Of course, this all plays out within a series of creepy secret corridors, cobwebbed basement laboratories, and densely shadowed cobblestone streets where flickering gas lamps dance to a soundtrack of bone-rattling thunderclaps and otherworldly howling winds.

Movies like The Haunted Palace always come complete with their fair share of plot holes and unexplainable behavior. (For example, if the descendants of the men cursed by Curwen are so fearful of the curse actually coming true, why do they all still live in the same town generations later?) At the same time, the movie is delightfully creepy and absolutely dripping with atmosphere. So what if Roger Corman goes a bit too heavy on the fog machine? Who really cares if all of the thunderclaps sound exactly the same? Granted, those looking for excessive gore or heaping piles of naked young bodies (in other words, those who believe Nurse is a modern masterpiece) should probably seek their gooseflesh elsewhere. Even for true horror aficionados, The Haunted Palace might not be the scariest, most mind-blowingly terrifying place to spend an evening, but, luckily, you can rent by the hour.